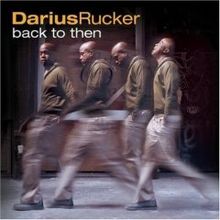 Back to Then is the title of a solo album released by singer/songwriter Darius Rucker, lead singer of Hootie & The Blowfish. The album was a departure for him as this project was a contemporary R&B album, as compared to his group’s pop/rock efforts.

In 2001, he recorded his solo debut album The Return of Mongo Slade for Atlantic Records. However due to contractual changes, it was never released. Rucker then signed with Hidden Beach Recordings and released Back to Then in July 2002.

The song “This Is My World” was used in the soundtrack for the film Shallow Hal.